Title For the Ugly and Unwanted, This Is Grindcore DVD

When BRUTAL TRUTH announced their comeback at the end of 2006 a collective sigh of relief went through the Grindcore community. The legend was back. Founded by prolific ex-ANTHRAX, S.O.D and NUCLEAR ASSAULT bassist Danny Lilker in 1990, the New York extremists quickly gained an excellent reputation worldwide and a large following within the Cgrindcoreore and metal scenes alike. In the US alone BRUTAL TRUTH sold over a 150,000 copies of their four albums and several EP’s. Several tours around the globe helped the band to establish an even larger fanbase, therefore it came as a shock when the Americans decided to disband in 1999 to follow other musical paths. In 2001 they were posthumously awarded a Guinness Book of Records entry for “Shortest Music Video” for their clip “Collateral Damage”. As soon as BRUTAL TRUTH returned to life they were picked up by prestigious festivals and tours. “For the Ugly and Unwanted: This is Grindcore” features a five camera angle, complete career spanning live performance and classic footage as a bonus. 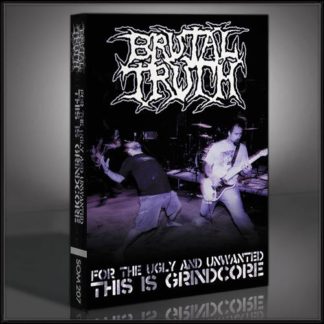 You're viewing: Title For the Ugly and Unwanted, This Is Grindcore DVD Price $10.99
Add to cart
Create a new list