Sermons Of The Devouring Dead (12″ LP on Green Galaxy Vinyl)

HELLS HEADBANGERS is proud to present CADAVERIC INCUBATOR's highly anticipated debut album, Sermons of the Devouring Dead. Comprising veterans of the Finnish underground, CADAVERIC INCUBATOR are a power-trio whose sole purpose is to bury the listener under miles of garbage and grime, sewage and sickness. Their long-gestating full-length debut, Sermons of the Devouring Dead comprises a dozen tracks of utterly ugly, morally bereft DEATH METAL of a most classic vintage – and authentically so. Forget about eras or scenes or geography; this is death metal for death metal maniacs, by death metal maniacs.

CADAVERIC INCUBATOR was formed in 2005 by Necroterror (bass/vocals) and Humiliator (guitar/vocals) with the help of various drummers who came and went during the band's first incarnation, which lasted around two years. The aim was to create old-school disgusting sounds influenced by early Carcass, Repulsion, Autopsy, early Xysma, Mortician, Blood, the early Mexican Disgorge, and such. No fun and no political garbage usually associated with the more grinding side of things – just raw, filthy brutality and total death! But after two demos – only the first one, Resurgence of Morbidity, was released – and countless live shows, the band split up in early 2007 due to personal problems between members.

Seven years later, in 2014, Necroterror resurrected CADAVERIC INCUBATOR by teaming up with his old comrade Pentele, who he had known from the early '90s scene – back in the deep Finnish backwoods when Necroterror played in his first-ever death metal band, Excrement, and Pentele was drumming for Carnifex and Festerday in the same area. Original founding member Humiliator was asked to join, as well, and the new demo Unburied Abominations was recorded. After several brutal live shows and a demos compilation on Terror from Hell Records, the band finally recorded 12 tracks in early 2016 for their debut album, Sermons of the Devouring Dead.

Now armed with the help of fetid fans HELLS HEADBANGERS, CADAVERIC INCUBATOR are set to smother the underground in all sorts of uncleanliness! Just a cursory read of the album's song titles should spell in no uncertain terms exactly what kind of timeless filth there is to bathe in: "Swarming Decay," "Horrific Festering Plagues," "Gravestench Asphyxiation," "Unburied Abominations," and the telltale "Conceived in Filth," among others. Heed these Sermons of the Devouring Dead and get swamped in gore! 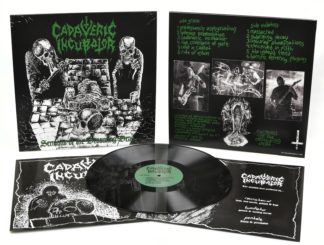