SIGNED MORTICIAN CDS BACK IN STOCK

USE COUPON CODE “POPOFF” FOR 15% OFF SELECT POPS!

300 copies on Random Mixed colored vinyl. We do not know what the color will be but it is usually multiple colors of vinyl combined to make a swirl/marble effect

Comes in a standard jacket with insert

To celebrate their tenth year of existence, Unfathomable Ruination are not only unleashing three brand new tracks, each yet again delving into the experimental diversity that they have become renowned for, but also a revitalized and re-recorded version of one of their most successful early releases; Suspended in Entropic Dissipation. Since 2010 the band has gone from strength to strength. With each line-up a new skin was shed, revealing a fresh new insight into perfecting the ultimate death metal experience. With the band producing top tier death metal with every release an evolution from its predecessor, Decennium Ruinae is no different. Presenting three tracks of eclectic, intricate and downright fierce technical death, Unfathomable Ruination raise the bar once again. Not only has the music taken another exciting turn, lyrically the release has taken a step away from Enraged and Unbound and takes you to a dark, infectious and callous alternate reality. Three scriptures written from the perspective of a vile, wretched cult sworn to infect and eliminate anything pure set the scene for a thematic journey into Ruination. 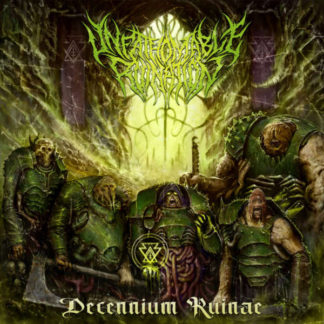