Proverbial Lambs To The Ultimate Slaughter (12″ LP on Black Vinyl)

FAITHXTRACTOR are a dark death metal band from Cincinnati, Ohio. Formed in 2005, the band initially existed as a studio project between brothers Ash and Marquis Thomas. In this form, FAITHXTRACTOR released a number of demos/EPs as well as two full-length albums. In late 2013, a live lineup was finally assembled. After some personnel changes, the lineup was solidified with Zdenka Prado (Estuary lead vocalist) on bass, Cody Knarr (Unkured) on guitar, and Ash handling drums and lead vocals; Ash is also active in such HELLS HEADBANGERS bands as SHED THE SKIN, THE VLADIMIRS, CRUCIFIED MORTALS, and SURGIKILL. Through this incarnation, the existing catalog was finally unleashed upon live audiences. By gigging/touring regularly during 2014 and 2015, FAITHXTRACTOR has gained great appeal and respect throughout the metal underground.

In late 2015, the band's most recent EP, Total Death Illumination, was released, showcasing the advancement of a band fully committed to their death metal cause. Initially released on cassette and CD formats, Total Death Illumination also received the proper vinyl treatment via Austenitized Records as a limited 7" in late 2016. However, it is with Proverbial Lambs to the Ultimate Slaughter where FAITHXTRACTOR truly come into their own. Recorded at the band's own Frequenscream Studios, FAITHXTRACTOR's third album is the grand culmination of all that's come before in their catalog as well as pointing the way forward for underground dominance. With an almost alchemical ease, Proverbial Lambs to the Ultimate Slaughter is pure and total death metal in songwriting and utterly black metal in its overall atmosphere. Grandiose 'n' gutted riffing collides with serpentine structures that twist and turn in a most diabolical manner. The massive 'n' molten recording ably amplifies the dizzying depths FAITHXTRACTOR here plumb, with Ash's absolutely blood-sick vocals spitting venom atop. Unconcerned with scene schemes and useless labeling tags, simply put, is a great METAL record – just that it's heavy metal of the darkest and most deathly order.

Long one of modern metal's best-kept secrets, with Proverbial Lambs to the Ultimate Slaughter will FAITHXTRACTOR achieve the acclaim they so rightly deserve. Step forward for slaughter… 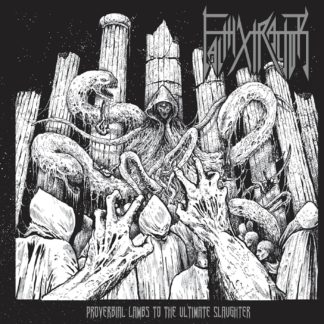