Credits:
Mixed/Mastered by Patrick Bruss at The Filth Chamber
Cover art and back art by Luisma

Tracklisting:
1. Burial Practices and Funerary Incantations (Intro)
2. The Woods Won’t Let You Leave
3. I’ll Swallow Your Soul
4. The Chin and the Chainsaw

This is a tribute to 80’s horror, clamshells and all!

If you took old school death metal, punk simplicity, and a dose of 80’s hair metal and thrash, threw it in a blender the resulting black goo would be the sound of VHS. It’ll stick to your teeth and probably rot your insides but if you are an old school metal fan you’ll love every second of it.

Lyrically VHS is like browsing a video store in the late 80’s. Inspiration is drawn from the classics but also some lesser known gems like Burial Ground, Nightmare Beach and Rats: Night of Terror. Succinct and bloody, the lyrics are like a well done gore scene but not without a sense of humor. This is a tribute to horror but not without poking a little fun at it.

Fast, catchy and bloody, that is VHS at its core. We are coming for you and we will not stop until the screaming stops. You have been warned!

Started in 2004, Goremonger was started as an alternative to having to play with musicians who were not interested in the grind, myself with Sinworm on drums started Goremonger. I quickly took it to the one-man level and it has never changed. 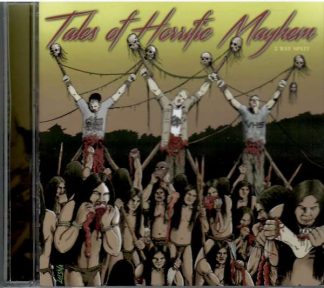