Blast off to a galaxy far, far away with Star Wars The Black Series Kir Kanos 6-Inch Action Figure and his quest for revenge! The former Emperor’s Royal Guard keeps his red armor as he hunts down Carnor Jax with his bladed weapon and blaster. This awesome figure includes a cloth cape with a nice lining and is ready to hang out on your shelf while looking for traitors to the Emperor’s throne.

Please be aware that this character was mislabeled Carnor Jax on packaging when it is in fact Kir Kanos. Hasbro apologizes for the oversight and wants to assure you that they are constantly refining their processes to provide fans with the high quality, accurate figures they expect. 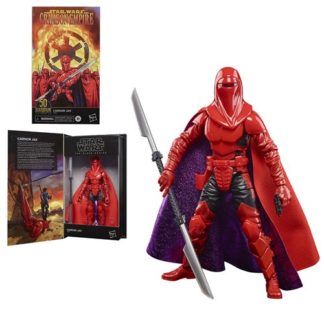