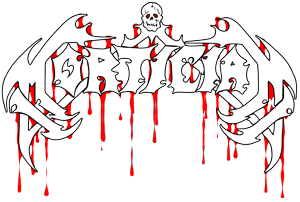 Comprising a staggering 28 tracks in 44 gore-soaked minutes, Final Bloodbath Session captures these legendary death metallers on recording with a real studio drummer for the first time and is the only Mortician recording to not feature any samples. As expected of such a long-running band with a deep discography, this re-recorded collection encompasses countless ’90s classics as well as then-new cuts from Domain of Death (2001) and Darkest Day of Horror (2002), all captured in their rawest ‘n’ bloodiest state. Originally released in 2002 on CD by Roger Beaujards’ own label Primitive Recordings, Final Bloodbath Session is long overdue for the vinyl treatment. Only 200 copies pressed on traditional black vinyl and only 500 copies on red/orange marbled (a-side/b-side) vinyl with black splatter. Includes a bonus cover track of S.O.D.