Desmond Tolhurst is literally one of the most intelligent, talented people involved in hard music today. That statement is not just meant to impress, it’s simply fact. Des is incredibly well educated, having attended Berklee Music College, studying performance, production and engineering. Take that raw training and temper it with the fire of having been in both MALIGNANCY and MORTICIAN, and you’ll easily see how Des came to create Head Trauma, because it’s just a slight glimpse inside his mind, and the technicalities and raw power of the record reflect just that. Together Des and Jeff Buchholz from GRINDLOCK brought HEAD TRAUMA to life, releasing “Psychotic Episode” in August 2004.
Desmond’s musical work ethic is close to manic proportions, balancing three projects simultaneously, but you’d be hard pressed to know it, since Des is a man of few words, and quiet reflection & contemplation. He prefers to just let the material speak for itself, and not only do the tracks on this disc talk, they SCREAM!
Desmond Has Done 3 Full Length albums in the past, with MORTICIAN. Those are “Hacked up for Barbecue”, “Zombie Apocalypse” and “Chainsaw Dismemberment”. He has also done some movie soundtracks and a tribute to Slayer on the album “Straight to Hell”, which was a MORTICIAN-ized version of the Slayer classic, “Piece by Piece”. His work with MALIGNANCY consisted of the “Ignorance is Bliss” demo, “Promo98” Demo, “Intrauterine Cannibalism” LP, and the “Motivated by Hunger” EP. MALIGNANCY truly put his bass playing skills to the test.
Regrettably, Desmond had to leave MALIGNANCY, due to school and a full time job in New York. It was not fair to the other members who could spend more time touring. As of August 2005, Des has formed a new band, PRIMER BLACK with Shane Tierney formerly of LEVIATHAN, ART MICEWICZ, JIM HORAN and RON KACHNIC of DIRTY BROWN EYE. Des always felt that perhaps someday, he and Ron would work together again, either on MALIGNANCY, or some other studio project, and now PRIMER BLACK has brought that into reality.
Desmond Tolhurst has done many musical projects before creating Head Trauma, and there is no slowing in his current pace either. Right now, there are three main projects he is concentrating on. One is, of course, Head-Trauma, and the newly formed band, PRIMER BLACK, where Des is back shredding alongside Ron Kachnic on guitar. The final focus of Des’ efforts is a Bass solo album, consisting of various classical and jazz influences. He uses several tracks to layer many bass guitars over the top of each other, much like a symphony.
Now that HEAD TRAUMA’s “Psychotic Episode” is finished, he will complete the bass solo album, while working on a full-length record for PRIMER BLACK. Jeff, Jason, Mike and Desmond are also working on new material for the next Head Trauma CD as well! There’s something on this disc for everyone, even a Cliff Burton style bass solo! Overall, it’s a great metal album that belongs in every true metal collection. 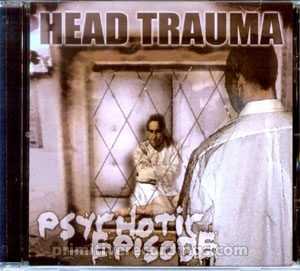